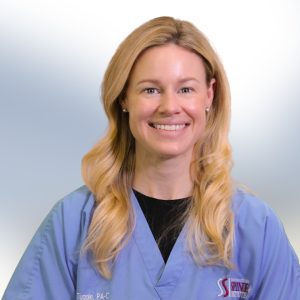 Ms. Tuggle was born and raised in Charleston, SC.  After completing college she joined the SSI team as a medical assistant to gain experience before completing her Master of Science at MUSC. She was excited to re- join the SSI team as a Physician Assistant to be able to work inter-professionally with a variety of providers in conservative care, surgery, and pain management to provide a well-rounded approach to patient care.

Ms. Tuggle attended Wofford College with a Bachelor of Science in Biology. She earned a Master of Science in Physician Assistant Studies from the Medical University of South Carolina. She volunteered much of her time with numerous programs to include Smiles for Life and CARES. She was also an active junior doctors of health mentor. Lane enjoys traveling to new places , live music and being on the water. She currently resides in Mt. Pleasant, SC with her husband and 3 children.